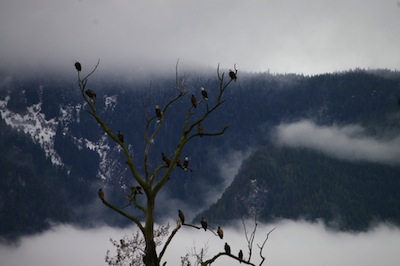 North America’s most iconic bird species is congregating by the thousands in B.C.’s lower Fraser Valley and this November biologists, photographers and tourists will be keeping an “eagle eye” on the action.

Every fall, thousands of bald eagles migrate to the protein-rich Harrison River as millions of salmon spend their final reserves of energy spawning on the Harrison’s gravel beds. After the fish fulfill their biological duty, a unique gathering of avian predators swoop in to feast on the salmon buffet.

In its18th year, the unique gathering of visitors celebrates the phenomenon at the Fraser Valley Bald Eagle Festival, held Nov. 16 and 17.

“It’s the biggest congregation of bald eagles in the world,” said Al Stobbart, who runs Sasquatch Crossing Eco Lodge, which helps host the festival. “There’s nothing else like it.”

The festival is hosted at various locations between Mission and the District of Kent, on Highway 7, about 100 kilometres from Vancouver. Although a bit off the beaten path for travellers, those who make the journey soon find out the area is a main migration path for bald eagles. In 2010, more than 7,000 individual birds were counted.

“There are three reasons why so many eagles come here in such large numbers,” said Dr. David Hancock, resident eagle biologist at Harrison Mills and founder of the Hancock Wildlife Foundation, a wildlife conservation and education organization.

The 72-year-old conservationist has been around birds of prey his entire life. At 11-years-old, he caught his first hawk, his first foray as a falconer.

“That was 61 years ago, I’ve been very lucky to have lived a lifetime surrounded by eagles,” he said.

Thanks to the Fraser Valley Bald Eagle Festival, visitors can immerse themselves, too. Harrison Mills and Harrison Hot Springs are the starting points to find a variety of viewing areas and first-timers are encouraged to start their journey by picking up a map and schedule and moving around to the congregation sites.

“It helps if you move around a bit to take it all in,” Hancock said.

Visitors can also experience the intrinsic relationship that local First Nations communities have with the land. Following the eagle festival weekend, on Nov. 23 and 24, the first annual Sts’ailes First Nation Salmon Celebration will take place.

“The Sts’liales People are part of everything we do,” Hancock said. “They have lived here for more than 6,000 years.”

Today, the Sasquatch Crossing Eco Lodge honours that history by being as light on the land as possible. Eleven months out of the years, its electricity is drawn from hydro generators on the turbulent Harrison River.

And even though during the fall water levels are low, there’s never more action on the gravel flats than during the coming weeks. Every day between 40 and 50 new birds arrive from their summer breeding grounds in Alaska. Soon that number will grow to hundreds per day.

“To witness that right out our window is phenomenal,” Stobbart said.

To find out how you can witness the largest bald eagle congregation in the world, check out our festival overview page