Trekking to where a wall of sand meets the sky 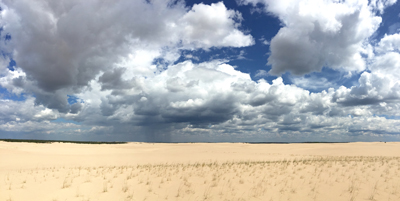 It's a whole other world at the Athabasca sand dunes.
Photos provided by Drew Anderson

WOOD BUFFALO — The corner of northern Alberta that is the sprawling Regional Municipality of Wood Buffalo is known for its sands. Mostly, it’s the oil sands that has tongues a wagging, but there are dunes north of Fort McMurray that deserve their own bit of attention.

Getting there, you pass through a contradictory landscape. Here are the infamous Syncrude tailings ponds just off the highway, stretching almost out of view. There is the Suncor mine, large enough to shock any first-time viewer. In between and beyond are trees and rivers that stretch interminably off into a flat, development-free horizon. 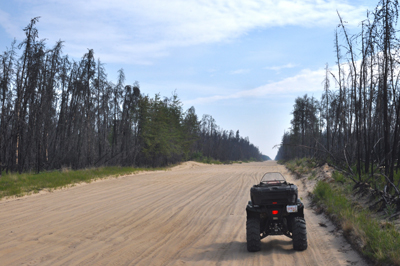 One of a kind adventures await at the Athabasca sand dunes.

Adventures Borealis, a new company operating out of nearby Anzac, is determined to bring more attention to this vast wilderness, with tours meant to engage with nature and change the perceptions of this corner of the world.

Almost 100 kilometres north of Fort McMurray you arrive at the Fort Chipewyan winter road. During the warmer months, this sandy artery serves as a thoroughfare for ATVs of all shapes and sizes as people flock into the surrounding forests. 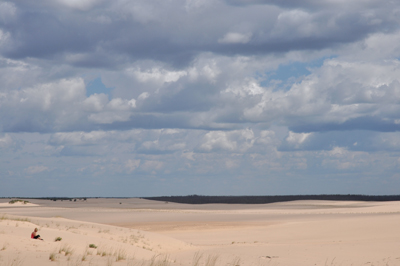 So vast are the sand dunes, you might miss the person in the photo.

Our target on this adventure is the Athabasca sand dunes in Maybelle River Provincial Wildland Park, a protected area only open to exploration by foot. Getting there, however, you must travel 90 kilometres along the bumpy winter road — a bandana or face cover is a must — through crowds of motorized explorers that slowly taper off as you get further off the grid.

Adventure Borealis started operations in November but is just starting to get serious now that the warm weather is here. It’s a small operation run by Ron Sturgess and Jordan Huppie, two kindhearted northern boys who know their way around the wild lands as well as the motorized beasts of burden needed for this kind of trek. 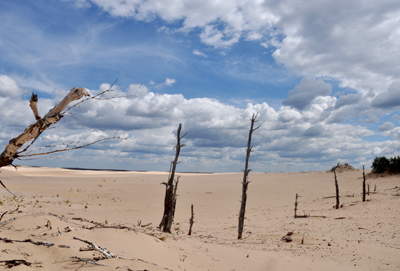 Sturgess and Huppie load us onto ATVs after arriving at the start of the winter road, each guest mounting their own ride. It’s several hours to the base camp they’ve established on the shores of Lake Laroque, a crystal-clear oasis nestled into its sandy surroundings. When we arrive several hours later, we find the gear unloaded. It’s been over an hour since we’ve seen another human and the only occupants of the lake are a family of loons.

Dinner is simple but delicious, consisting of steak and potatoes cooked in the fire. It’s indicative of the meals you eat on this tour — simple camping fare done well. You’d be wise to tell them if you’re a vegetarian ahead of time. 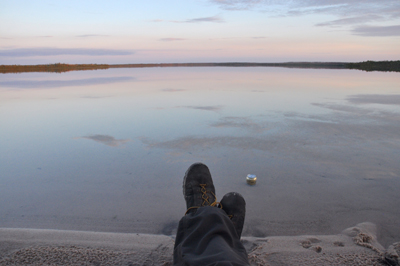 Relaxing after a day at the dunes is easy because you practically have the place to yourself.

There’s a lot of sand during the first day, but it’s not until the second day that you experience the unknowable volume of it contained in the dunes. After an eight-kilometre ATV ride from the camp, it’s a short walk through the woods before you encounter a wall of sand rising above you. Scrambling up the steep incline you’re met with a vast and unexpected expanse of sky and sand.

Experience Alberta's moving desert for yourself. The Athabasca sand dunes are a one-of-a-kind phenomenon sure to wow adventurous types.

Raised above the surrounding forest, which the dunes are steadily consuming, the dunes offer an amazing view of the surrounding landscape, allowing you to take in the indescribable size of the north, from the sky to the forest to the sand. There is no one in sight and there’s ample time to explore the unique environment in peace.

Upon returning to camp, the lake is a godsend after a dusty ride and a walk through the dunes. The water is cold, but not unbearable and is a refreshing way to rid yourself of a portion of the sand that has collected on your body. 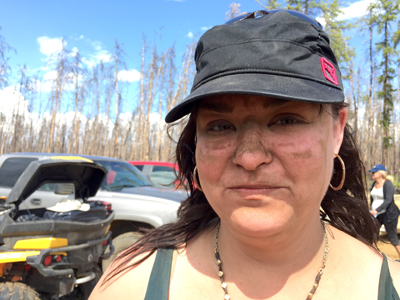 Prepare to be wowed by the sheer size of the dunes and to get a little dusty.

Beers, snacks, and eventually a dinner of chicken and Caesar salad around the fire cap off the day and it’s to bed to prepare for the long journey home.

The sand dunes adventure isn’t for the lighthearted traveller, and Sturgess warns that if any princesses show up for the tour, he’ll toss them in the lake. I believe him. It’s also a fair warning.

This is not five-star glamping in the northern wilds, but a dusty adventure with simple food and the expectation that you can handle yourself. If you’ve got those traits and are searching for an authentic trek into lands not seen by many, a trip to the oil-less sands beyond Fort Mac’s hustle is one to remember.