FestivalSeekers and Miss604 want to challenge you this summer to #ExploreCariboo. The Cariboo region is home to an array of funky, creative communities like Wells, Quesnel, 100 Mile House, Williams Lake and Horsefly. Explore more, see the links below and #ExploreBC.

“We had the first bathtub in town,” Barb Dodge said from behind her laptop. I did a double-take and looked at my surroundings. I was in an office at the RBC Building on St. Laurent Ave. in Quesnel, B.C. Barb, the branch manager, had brought in some old archival photos mounted to cardboard along with an original scale they used back in the days when they accepted gold at the bank.

Quesnel is named after fur trader and explorer Simon Fraser's clerk, Jules Maurice Quesnel. The area was established as an outpost for the fur trade and the community grew at the fork of the Quesnel and Fraser rivers in the early 1800s. When gold was discovered in the Fraser, prospectors rushed up the river from 1857 and the Cariboo Gold Rush was born, leading to the growth of Quesnel.

The Cariboo Wagon Road brought more prospectors in 1861 and the region grew to be the most populated city west of Chicago and north of San Francisco! At the Quesnel Museum (703 Carson Ave.), which is in the same building as the Quesnel Visitor Centre along Highway 97, I learned that due to its location, Quesnel became a major stopover and supply centre for the gold fields. The town prospered and grew through this first gold rush, and a second in the 1920s.

#ExploreCariboo this summer. Plan your trip to Quesnel... 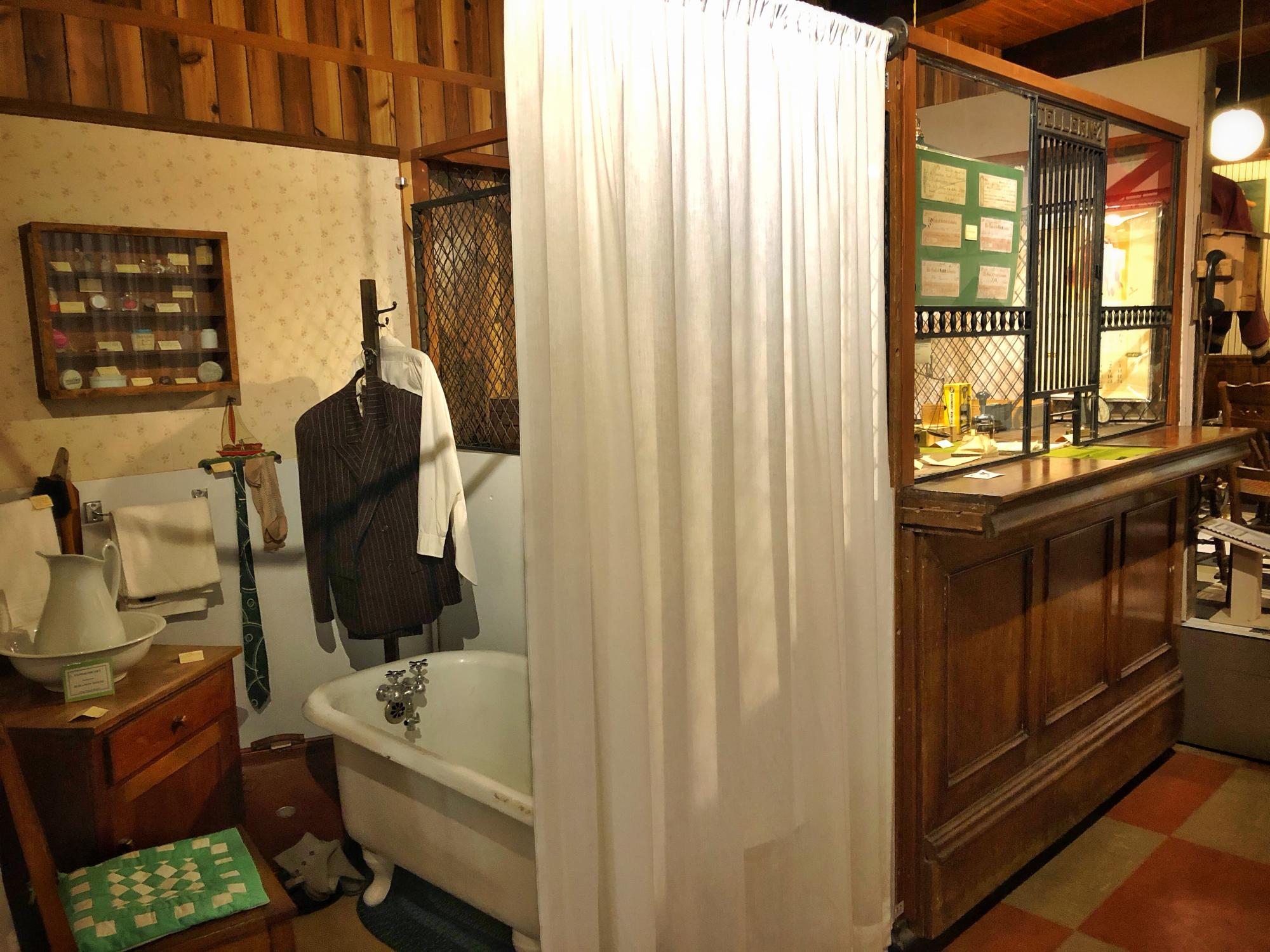 Vignettes recreate what life was like in the Gold Rush days, including the ever-important General Store.

The bathtub story is pretty legendary. In fact, they have a bank teller’s stand in the Quesnel Museum, with the original clawfoot bathtub displayed next to it.

It all stems from a former bank manager in 1928 who wanted his staff to be presentable and clean for customers, so he offered them bathing facilities in a building addition behind the original Front Street bank building. (It’s now home to the Quesnel Observer). Word soon spread that the bank had a bathtub. If there was a dance or social event in town, people would come from all over to primp and clean for the occasion.

To play on this history, the RBC branch on St. Laurent hosts a bathhouse during Billy Barker Days (July 19-22, 2018). The free family festival, now in its 45th year features a midway, dances, parade, rodeo, the Gold Dust Mall, a laser light show, and many other activities sponsored by other community organizations.

Learn all about the fun at Billy Barker Days in this FestivalSeekers story. 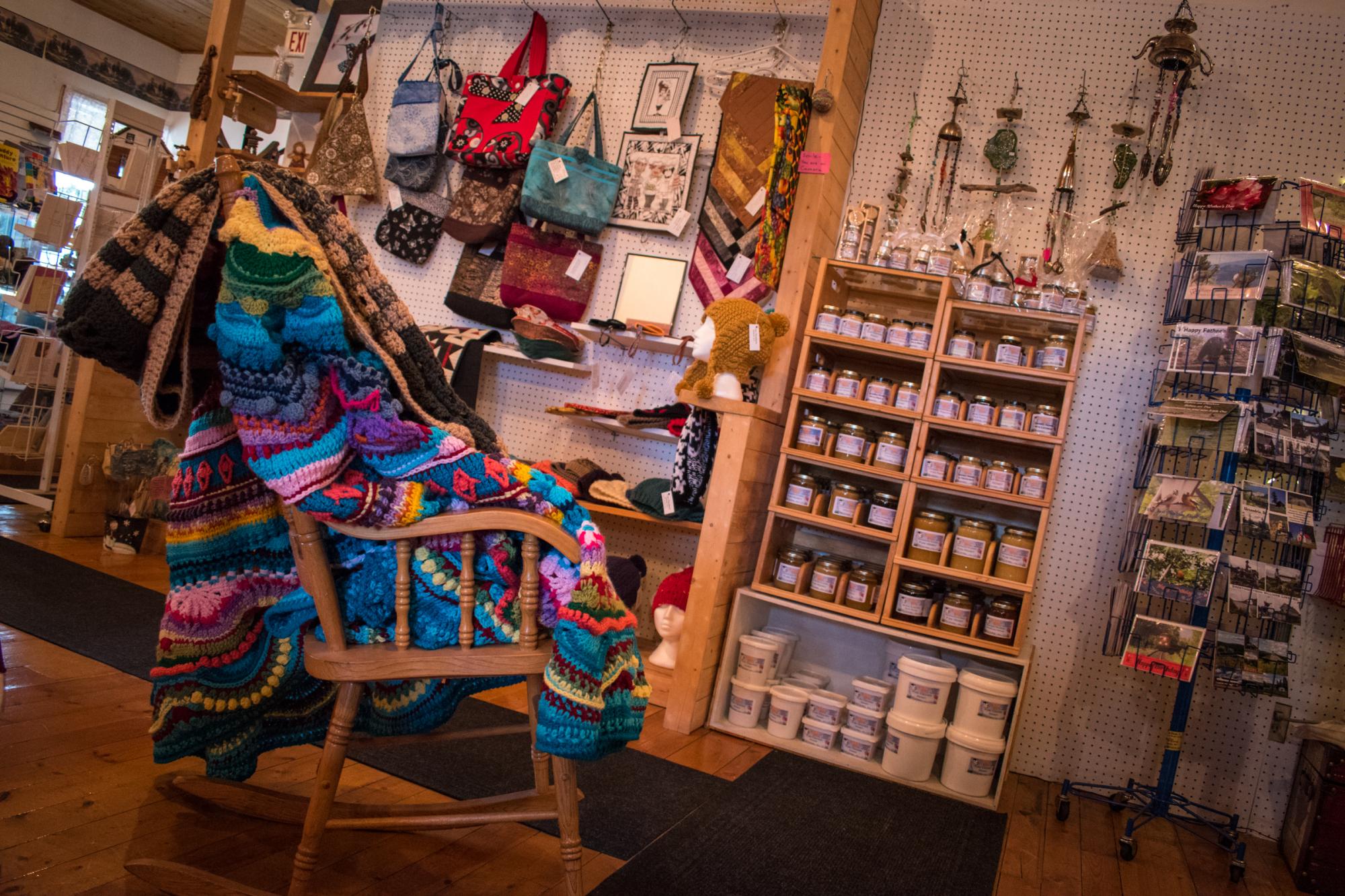 Furs and beaver pelts are no longer traded in Quesnel’s oldest building as this old HBC store is now home to Quesnel Keepsakes.

Quesnel’s downtown merchants and services have been supporting the gold rush for the last 150 years and today, you can enjoy that same entrepreneurial spirit, with a historic gold rush twist at unique shops like Cariboo Keepsakes (102 Carson Ave.). This artisan co-op operates out of the oldest building in town, the Hudson’s Bay Company store that dates back to 1882.

Browse local crafts, souvenirs, knitted, quilted, and painted goods from a talented roster of artists who all volunteer their time to work at the gift shop. Walk the original wood-planked floor and find nods to HBC history in various art pieces and displays. 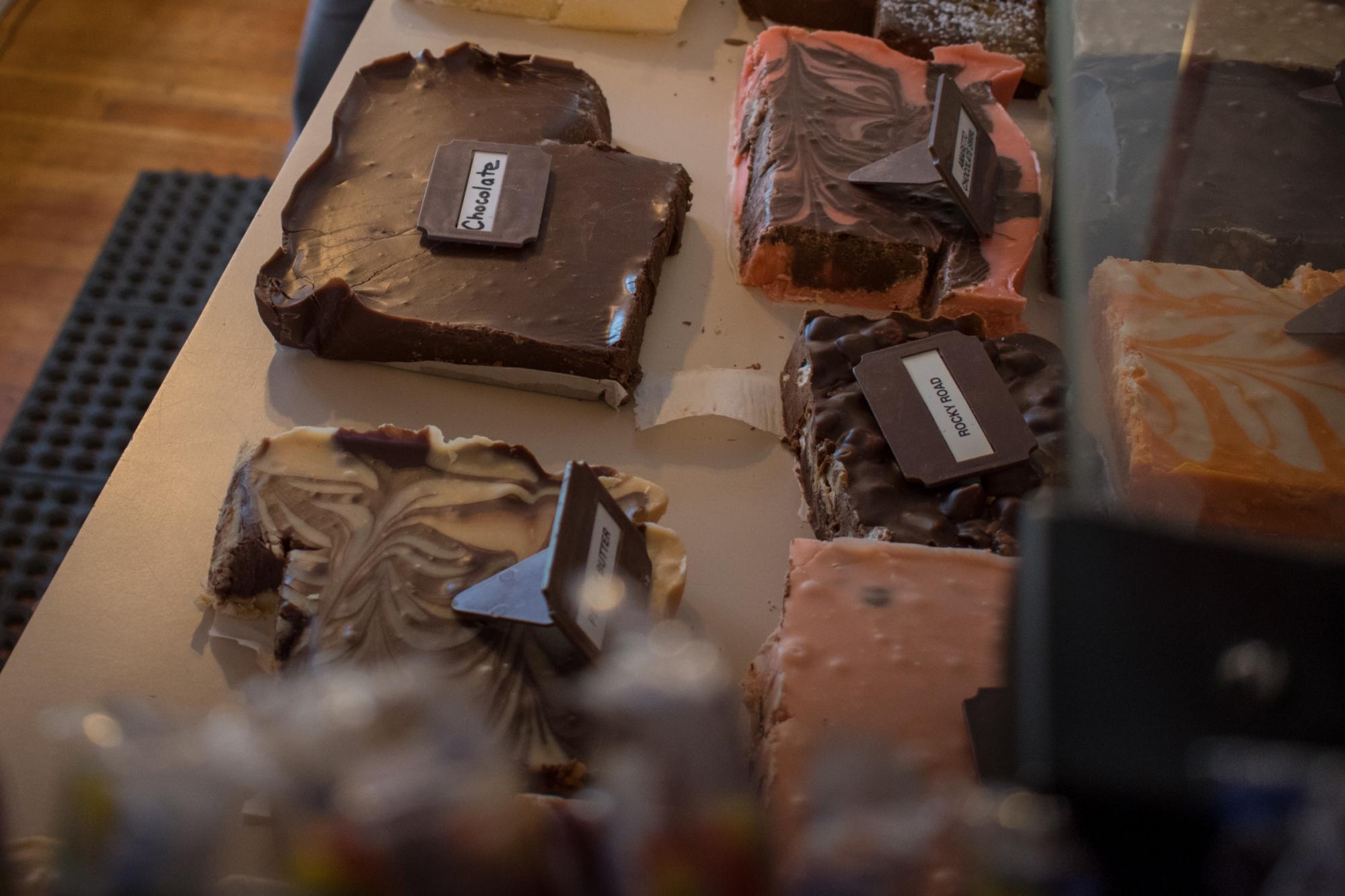 You can also shop in Quesnel’s second oldest building and oldest private residence at Barkerville Fudge. Located in the Mitchell House (relocated to 473 McLean St.), it was built in 1907 by Archibald and Edna (Wells) Mitchell. Hand-made fudge, glass jars of candy, old-fashioned hard candy sticks, salt water taffy, and sweet refreshing slushies are served up in the house of one of the many pioneering families that helped shape Quesnel.

Onto the grittier side of maintaining a Gold Rush town, visit the Antique Machinery Park (3055 Dragon Lake Rd,) to check out some cool, old machines, vehicles, carriages – and you might even run into a blacksmith like Arnold Kilsby. “It’s the father of all trades,” he said as he cranked air into a coal and charcoal forge.

He’s got some really neat upcycled items on display, like a horse hoof rasp that’s been forged into a gate hinge and another that’s now a saw. Old railroad ties? Those can be twisted and hammered into knives, and there’s a wrench that’s now a hatchet. 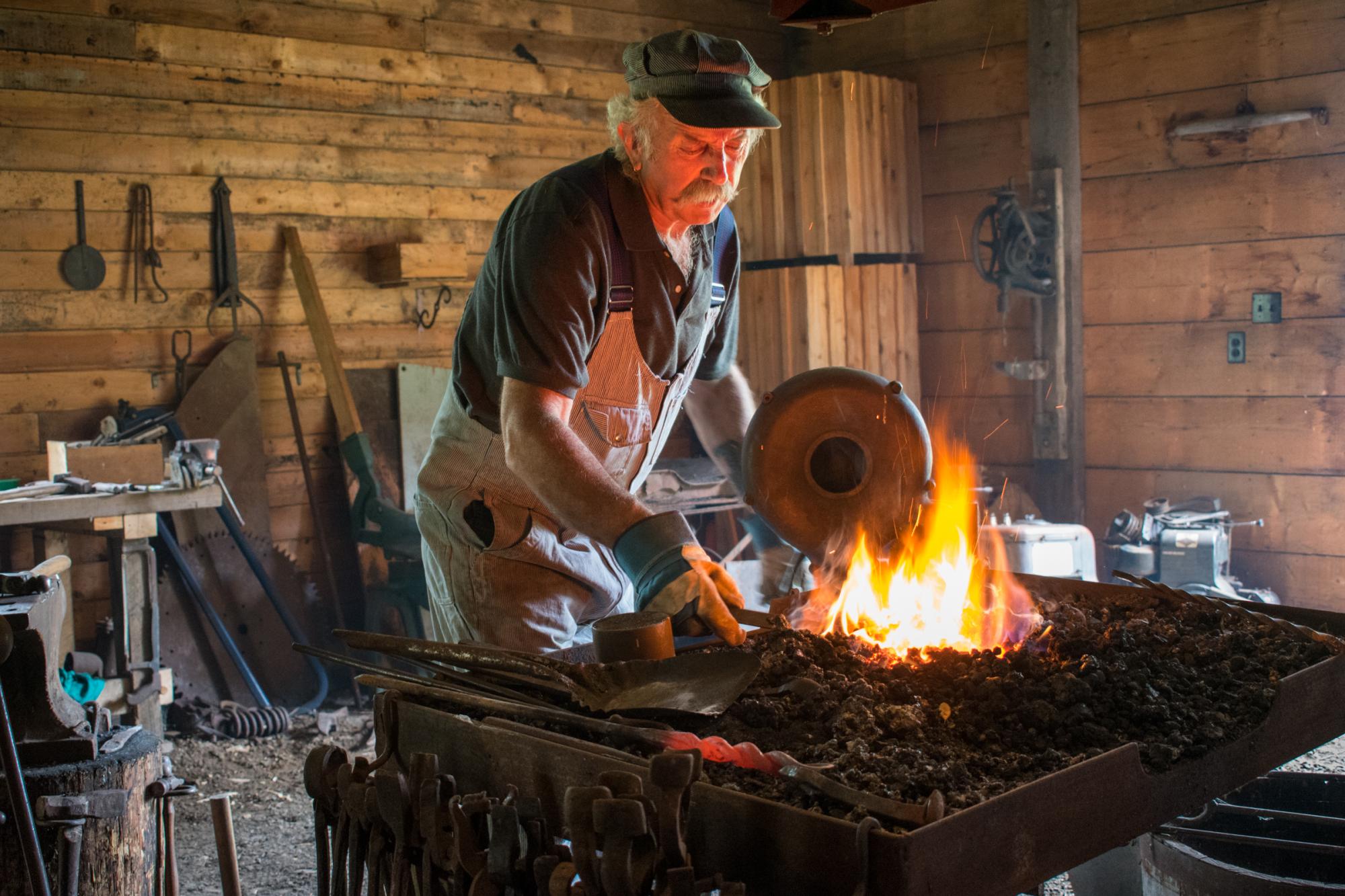 Blacksmith Arnold Kilsby stoked the forge’s fire at the at the Antique Machinery Park in Quesnel.

In the museum portion of the park, there’s a restored stagecoach that will be on display during Billy Barker Days. Word has it that it used to be owned by Queen Victoria herself!

To follow the path of old sternwheelers that ran from Soda Creek near Quesnel to Fort George (Prince George) through the upper Fraser River, you can head out on a tour with Quesnel Jetboat Adventures. Follow the path of the legendary BC Express Company’s BX steamer that ran during the construction of the old Grand Trunk Pacific Railway starting in 1910. 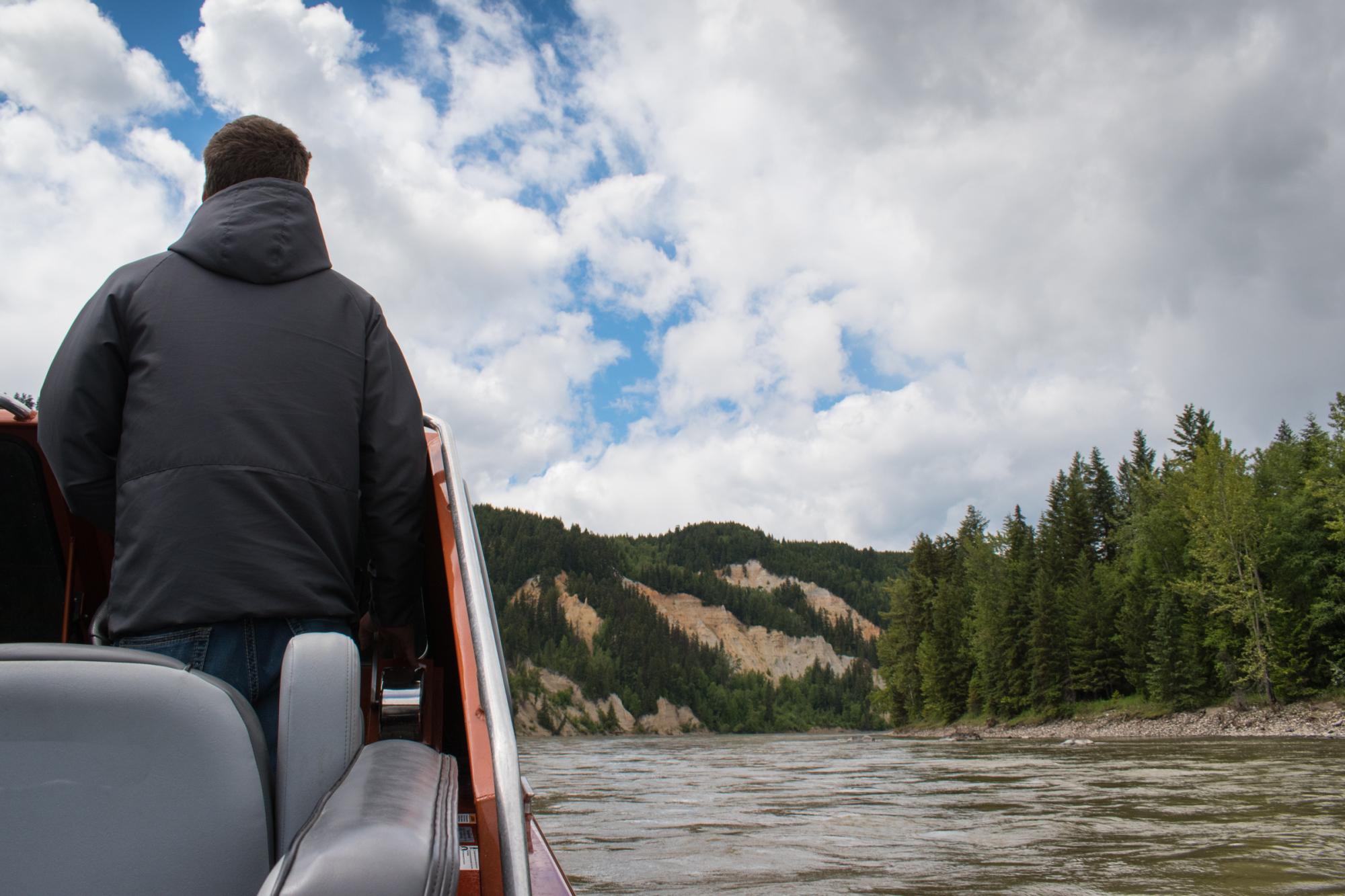 Take in the rugged landscape of eroded cliffs and grassy banks and spot some ghost town remnants on your way through the canyon’s fast-paced waters. Proprietors Brittany and James Vaupel can even take you gold panning along the way.

You’ll find Gold Rush heritage everywhere in Quesnel, from a bank bathtub in the museum to the city-wide Billy Barker Days festival that continues to celebrate the area’s pioneering spirit. 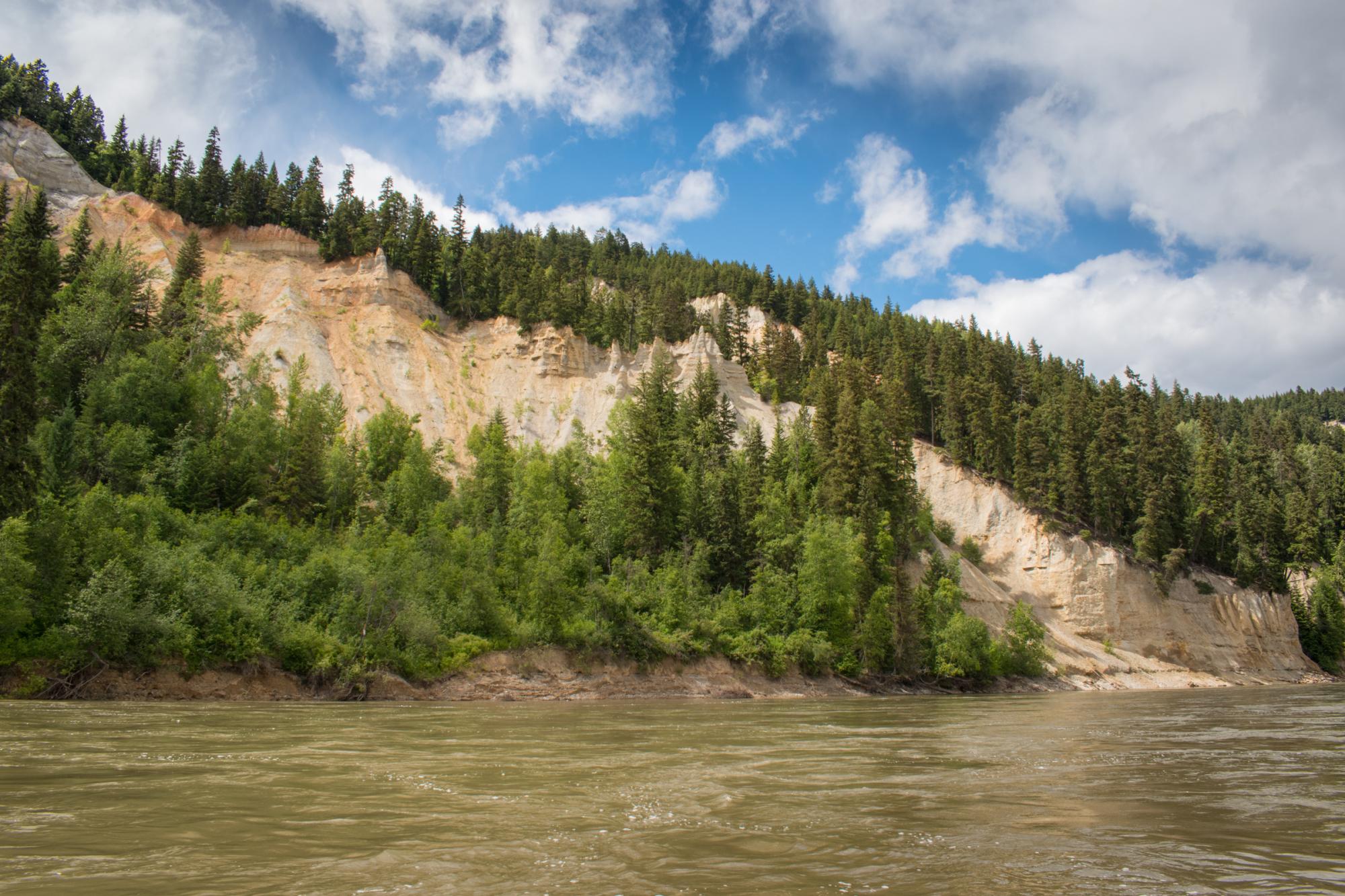 #ExploreCariboo this summer. Plan your trip to Quesnel...