'Loud, shiny, fast:’ That’s the formula for a fun airshow in Quesnel

I touched down in the Quesnel Airport, just two hours from YVR, collected my checked bag, and walked over to the Quesnel SkyFest counter.

Adorned with festival posters, and a tempting ad for the SkyFest raffle to win a Mustang, I was greeted by festival co-founder Barb van Halderen as well as a tall, wooden giraffe sporting many squadron stickers.

The giraffe is the world-famous Linda who originated at the Billy Barker Hotel and ended up on some incredible missions with Canada’s CF18 demo team. Barb insisted I join the #LindaSelfieClub before we set out for the day. 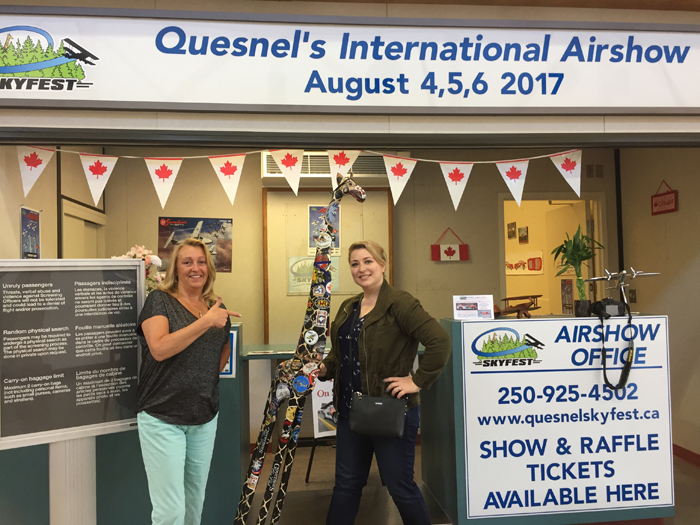 Barb and Jerry van Halderen, both members of the flying club, founded the Quesnel SkyFest to not only showcase airplanes, but to prove that an airshow could be an inclusive and family-friendly community event for all.

“We really wanted to bring quality performances, along with top performers and legends to Quesnel,” Barb told me while we hung out with Linda. “Our formula is loud, shiny, fast!”

While SkyFest's big draw is the spectacle in the air, they also have a huge Kid Zone on the ground, along with a classic car show n’ shine, live entertainment, food vendors, and more. It’s a festival on the ground and in the air!

Over the years Quesnel SkyFest has built up such a reputation that its had all three of Canada’s military teams (Snowbird, CF-18, Skyhawks) perform, and request to return.

I left the airport building with Barb and we walked over to a hangar where Jerry was pulling out their Cessna. I was going to go for a scenic flight, and to also try my hand at flying! I’m no Bud Granley (a legendary SkyFest regular) but I was up for the challenge. 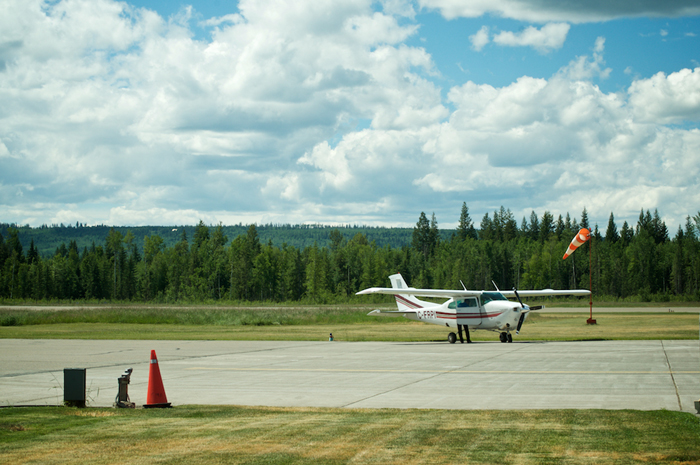 Jerry led a walk-around of the aircraft, teaching me a little bit about the parts of the plane but also the safety measures that one must always take before flight.

From the air we saw the city, the convergence of the Quesnel and Fraser Rivers, and many, many of the lakes that spot the Cariboo landscape. We also flew over Pinnacles Provincial Park, a 124-hectare pine forest overlooking Baker Creek, where I ended up going for a hike in the following days. 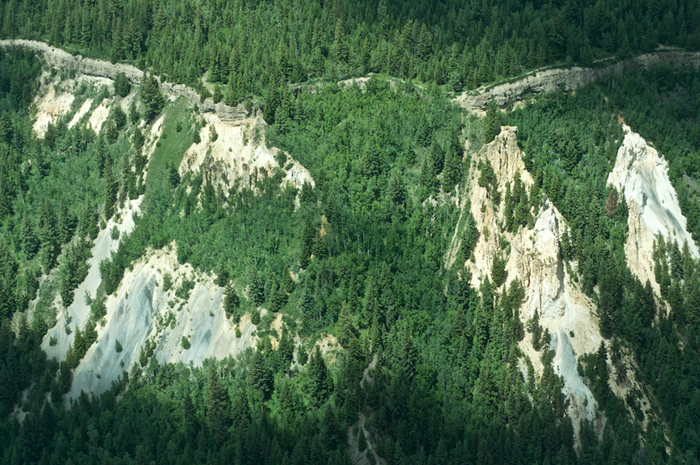 These formations date back 12 million years, when molten lava flowed over the earth’s surface and cooled in flat basalt layers over older layers of ash. Toss in an ice age, melt-water streams, and a couple of millenia, and you have Pinnacle Park’s hoodoos! A favourite spot for a leisurely walk or an extended hike around Quesnel. They’re also pretty spectacular from the air. 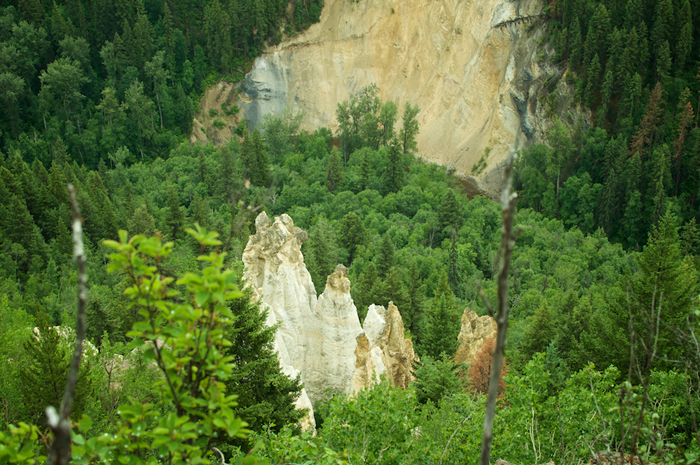 After a few more aerial snaps with my zoom lens it was my turn at the controls. I still couldn’t believe it! My adrenaline was pumping but I do remember a few key words of advice from my instructor. 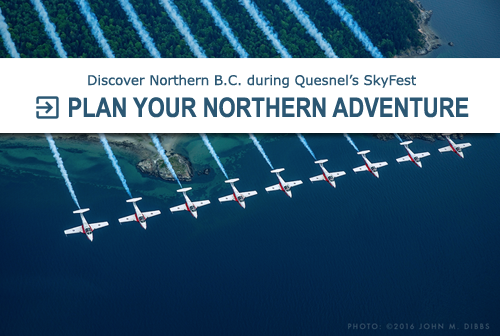 Jerry pointed out the meters and indicators I should keep an eye on, and reiterated that it’s always important to come back to true when you’re turning or pushing in the control yoke. Unlike a car wheel that you would keep turning, in this plane you would initiate the turn, then bring the controls back to centre. I must have soaked up a great deal of his advice because the plane was under my control for several minutes. Blue sky, white puffy clouds, and lush green forests below. 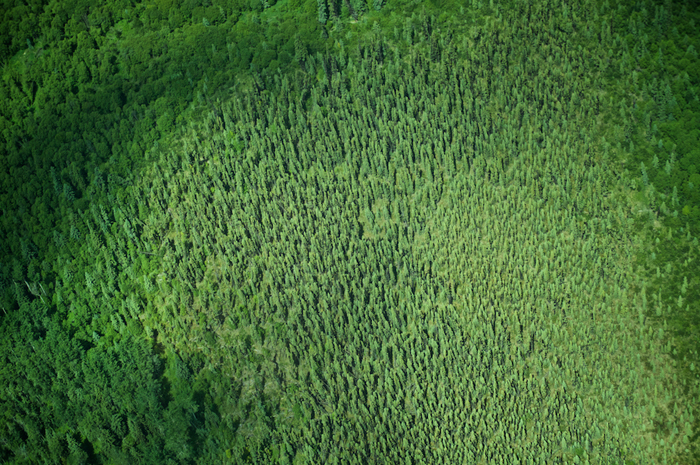 When my turn was over, we headed back for a runway approach at the Quesnel Airport. Did I just fly a plane? It was still sinking in. Landing gear down, runway lights at the ready, tower contacted, we soared over the town one last time before touching down on the tarmac. 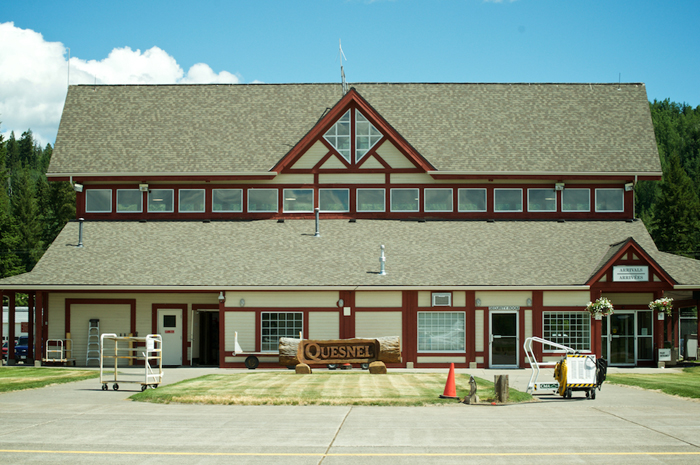 It was at the Quesnel Airport that I learned that air shows are for anyone. They can be inclusive, family-friendly, community-oriented, and can sure provide the thrill of a lifetime!

Catch high-and low-flying aerobatic stunts this August long weekend (Aug. 4-6, 2017) at Quesnel SkyFest as they bring in international aerobatic performers who will delight spectators of all ages.

And if you spot Linda, be sure to tell her I said, “Hello!”

The City of Quesnel is found along Highway 97 north of Kamloops and about an hour south of Prince George.  The community is within the Cariboo Regional District, home to many adventures and history. The best way to take it all in is with a driving tour. Get started on planning your roadtrip here.

Sure you can go here and visit, but we think you might even consider moving here because this rural community puts a whole new spin on life.  Check out this website that might just inspire you to investigate more.

Are you ready to enjoy SkyFest? Share this page with your friends.