These are tough times for musicians who thrive off playing their music in front of a live audience. But online events like the recent #BuyBasin Festival throughout April gave more than a dozen musicians from the Columbia Basin a chance to connect with audiences and do what they love best during a series of interactive Facebook Live Broadcasts.

Seeing that success and the audience feedback, FestivalSeekers will showcase an expanded list of musicians from B.C. and Alberta all summer long in a series called Musician Monthly, produced by Sage McBride, the lead singer of the Fernie-based band Shred Kelly.

“People were just really happy to see something positive in their newsfeed,” Kelly says. Any musician she asked to join in the festival was thrilled to be there: “No one’s on tour right now and they have free time, so they were really keen to take part.”

McBride’s monthly feature on FestivalSeekers will include musicians from Alberta and B.C. Within those stories, readers will learn what projects they’re working on or where their next live or online gig is happening. There will also be some catchy music videos.

Anyone who attended the #BuyBasin festival on Tuesdays, Wednesdays and Fridays was treated to a noon-hour live show from such musicians as Cranbrook’s Maddisun Keiver, who garnered 3,500 video views from her performance. Shred Kelly’s performance got 8,000 video views and they sold 50 per cent more merchandise online afterwards.

“It was great to have the support and backing of FestivalSeekers and the Basin Advisors,” said Maddisun Keiver. It was also a chance to engage with her audience, with people asking her when her new music is coming out. (FYI, it will be at the end of May.)

Keiver also said she also got some special shares from organizations such as Fisher Peak Performing Artists, Cranbrook E-Know and Key City Theatre. "It really helped me spread the word that I’m an active musician.”

Our own Doc Pow, heard Sean Rodman of the Powder Highway based band "Moontricks" during the #BuyBasin Festival, which lead him to buy his first-ever virtual concert ticket.

“So cool, Sage connected us with Sean to play the fest, and when I heard his LIVE, I had to know more about this band," said Doc.

He found out Moontricks was producing a streamed concert a few weeks later and along with a very small group of friends he got to hang out in front of the laptop and jam out live to a Moontrick’s show.

"Fair enough it doesn’t replace the live experience you get in a theatre, but for times like these, it sure did the trick!” Doc said.

Thinking outside of the box is what Moontricks and Shred Kelly do, which led them to a remake of the  Buffalo Springfield tune, For What It’s Worth, a collaboration between Shred Kelly and Moontricks. Check it out here.

All of the musicians said they had positive feedback during the #BuyBasin Festival, said McBride adding it was a great experience just to connect with people again after more than a year of not being able to play live.

Anie Hepher and Mike Hepher (aka Red Girl) based in Fernie, aren't new to doing Facebook Live gigs, but what she enjoyed most about the chance to take part in the festival was the broader exposure outside of the Kootenays for their music. "Just knowing the exposure it would bring through the Basin, I loved that," said Anie.

“At this time, so many musicians are creating but not getting the word out in the regular way like touring,” said McBride “It’s great to keep people updated and keep people connected with them, so they can stay afloat. The monthly feature will be ideal."

“We don’t want to lose that part of our culture in Canada. If there’s a way to support musicians, that’s awesome.”

That's what McBride will be doing through October with her Musician's Spotlight feature. Be sure to check back on FestivalSeekers mid-May to read about the first of six McBride spotlights on Alberta and B.C. musicians.

Want to stay up to date on all things Seekers? Subscribe to our newsletter by clicking here. 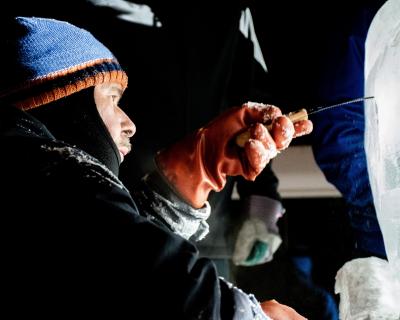