A deep connection to history

This area has a unique beauty with colourful sands and stories 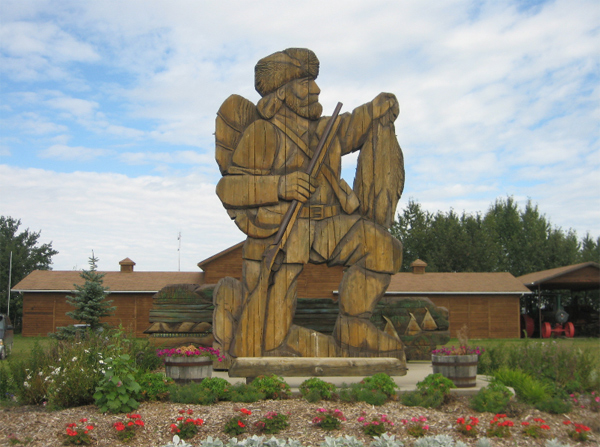 Bonnyville and Lac La Biche are rich in history.
Photos by Kathy McCormick

I wasn’t expecting to see the trappers of the early 1800s behind the historic Lac La Biche Mission, but there they were, frying up some bannock over the campfire.

Nor was I expecting to see one of them with the big musket at the ready.

They were dressed in furs and Hudson Bay blankets, settled in for days. Turns out, there wasn’t anything to worry about. They were from the Edmonton House Brigade and they were camping smack-dab in the middle of one of the most important fur-trading areas in Canada, demonstrating their way of life.

I knew northeastern Alberta was a gem for its pristine lakes and abundant opportunities to enjoy nature at its best – but it’s not just about surf and turf. 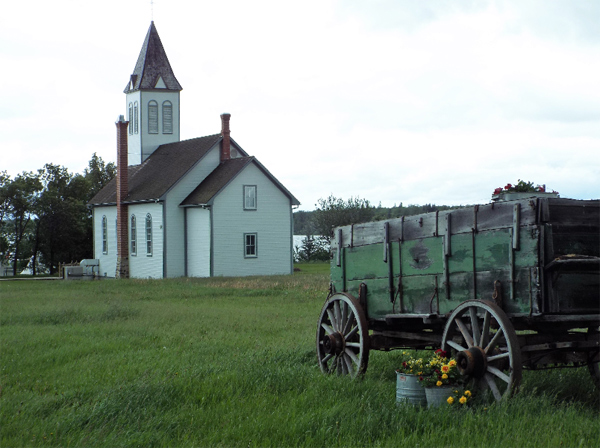 One of the first churches in the area.

Lac La Biche is one of the oldest settlements in Alberta. Fur trader and explorer David Thompson first came to the area in 1799, followed by the French missionaries in the mid-1800s who built Lac La Biche Mission, which includes a church, school and buildings. The buildings today are still like a small settlement just 16 kilometres northwest of Lac La Biche, and it's a museum and national historical site.

I couldn’t leave without ringing the church bell to call everyone to prayer.

In Lac La Biche, McArthur Place adds more layers to the hamlet's history. The former luxury hotel sits majestically on the shoreline of the lake. Its storied past is of interest, not to mention the full museum of artifacts and details of life gone by. 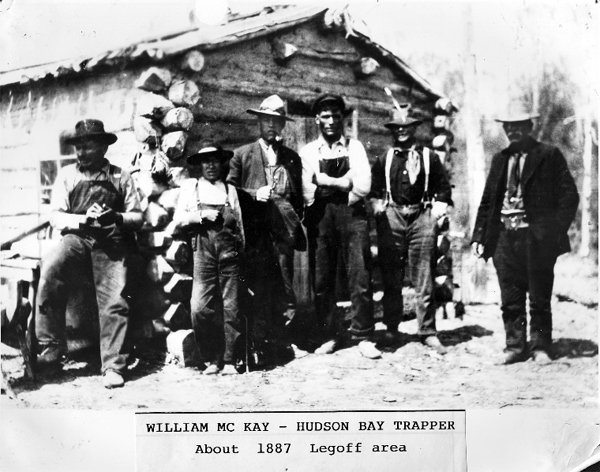 “McArthur Place was originally built to be a luxury hotel for wealthy Edmontonians in the early 1900s,” says Victoria Holota, our guide. “J.D. McArthur built more railroad miles here than any other contractor in Canadian history, so he thought a hotel would bring folks in and open up the area – but it only lasted nine years and he went bankrupt.”

The hotel was used as a hospital for many years until its current use as a museum and office space.

The area’s most interesting heritage, though, is the unique cultural diversity. The area is like a patchwork quilt – each piece distinctive and different, yet together offering a rich ethnic experience.

“Demographically, there is probably nothing like this in the Western hemisphere,” says Omer Moghrabi, mayor of Lac La Biche. “Sure, there are larger settlements everywhere, but proportionately we are truly unique.”

Moghrabi, himself, is a Lebanese immigrant who came to Lac La Biche when he was just a year old.

There is a large Lebanese population (the second Muslim mosque in Canada was built here in 1958), a strong French influence (including in Bonnyville and Plamondon), ‘White’ Russians (formerly from Belarus), Ukrainians, Polish, Italian, and a large indigenous community.

Cold Lake, of course has its military history. Built in 1952, this Cold War facility was transformed into the museum and has been designated an Alberta Provincial Historic Resource.

Bonnyville, the youngster of the group, was not founded until the early 1900s, and it has its own unique story to tell with its French heritage. It’s all in the Bonnyville and District Museum.

Then there’s the great outdoors.  I was amazed by the soft sand, the vast - and plentiful – lakes and the beautiful, long summer days followed by warm nights.

“I’ve always loved Lac La Biche,” says Rick Hemmaway, who will play during Pow Wow Days with his band, The Torpedoes. “I love the people, the natural beauty and the northern lights that just dazzle your eyes…everything!”

The northeastern part of Alberta is made for sitting by a campfire roasting marshmallows for S’more treats. Whether you’re a fisherman, a boater, a paddle boarder, a swimmer, a sandcastle-making champion, a hiker, biker or quader - or simply a sun worshiper and nature lover - this natural playground beckons. 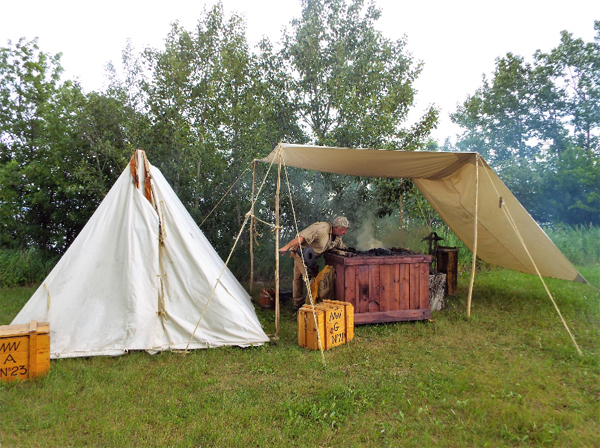 Camping looked a little different in earlier times as recreated by the Edmonton House Brigade.

Lac La Biche – the lake – is 236 square kilometres with sandy beaches and 3.2 square kilometres of islands. It includes the beautiful Sir Winston Churchill Provincial Park, the only island provincial park campground in Alberta with full amenities for camping and day use.

“I’m originally from Manitoba, but came here 10 years ago when I semi-retired. I love the people and the lake view,” says Danny Stevens, president of the Lac La Biche Legion.

The hamlet of Lac La Biche sits on the shoreline, 225 kilometres northeast of Edmonton. It has a population of around 2,500 people (8,400 in the region), but that swells in summer as thousands more come to play. 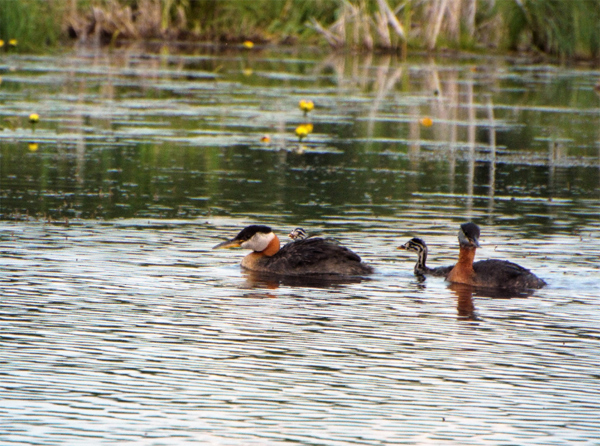 Enjoy the many lakes full of fish and fowl.

Beaver Lake is just five kilometres south of Lac La Biche, a deep lake of 33 square kilometres and also offers campsites. As many as 100 lakes of all sizes and shapes are in the region offering more than 1,300 beach-side campsites and cabins. The area has an incredible 70 per cent of Alberta’s ‘Class A’ beaches.

Then there’s Cold Lake. I was amazed to see the size of it, crosses the border into Saskatchewan.

Located 280 kilometres northeast of Edmonton and 150 kilometres from Lac La Biche, Cold Lake boasts 400 square kilometres of crystal clear water and 15 beaches, only six of which can be accessed by car.

I was ready to catch a whopper - one of the biggest pastimes on this large lake - as I climbed into the beautiful boat that Brian Hamilton has for hire for half- or full-day guided fishing excursions.

“There’s lots of sand,” Brian says, as he tours us around the lake, looking for that elusive hole where the big ones are sitting. “Kinosoo Beach is the original beach, but there are so many more – and each has its own unique character. There are five different colours of sand, giving the area a unique beauty of its own.”

I wasn’t sure what to expect – especially when I saw the line tug, tug, tug and Brian shouted, "You’ve got one.” With his guidance, I wrestled it to the side of the boat and it was big lake trout weighing about six pounds. 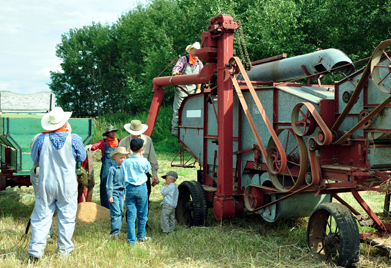 Brian and his wife, Debbie, own the country bed and breakfast retreat - Hamilton House, just a few kilometres from Cold Lake in Cherry Grove. While we visited, they made sure we saw the wildlife on the muskeg lake just steps from their place.

I was canoeing in the wilderness retreat, enjoying the peaceful beauty and surrounded by nature at its best.

With the marshes and muskeg lakes, the latest adventurers are loving “mud bogging” – in fact, areas such as Plamondon (Aug. 19-21 – check it out here) and Bonnyville (Extreme Mudfest – Aug. 26-28 – click here) have featured events around this new hobby.

The Iron Horse Trail is one worth considering, a reincarnation of the railroad tracks that brought civilization to the northeastern communities. The tracks are gone and a path takes it's place.

Interested in checking out the area for yourself? Share this page with your crew and start planning.