Ever been to Pow Wow Days? You don't know what you're missing

Pow Wow Daya is a mash up of all kinds of activities, including a little downtime at the beach.
Photos by Kathy McCormick

LAC LA BICHE -  Even though it was amateur night and anyone was welcome to entertain the packed local hangout in Lac La Biche, I wasn’t about to step up to the mic to exercise my vocals on this night in La Bone’s Sports Pub.

And that was a good decision, because once I heard the level of talent from the locals hitting the stage, I’d have likely cleared the pub quickly. But my feet got a workout because I couldn’t stop tapping them all night long.

The talent in this hamlet of around 2,500 people (8,400 in the region) is remarkable. I was thinking I’d stepped into Nova Scotia’s Cape Breton or perhaps, Newfoundland, by mistake. In fact, when one patron stood up, held up his glass and yelled, “Sociable,” I was sure I was in a time warp.

It’s no surprise to the locals, though.

“The talent here is kick-ass,” says Paul Arsenault, one of the musicians I’d hear later that night.

For close to 40 years, Arsenault has been hanging with the bands in Lac La Biche - but he’s not always jamming. His musical talents include artistry on the electronic end of the entertainment, too.

“I have more gear than talent,” says the modest musician, getting ready to make those guitar strings sing.

And there goes my foot stomping, again.

He’s been part of Pow Wow Days for decades, where singing and jamming are just a part of the fun. You’ll see jigging and fiddling as well as the vocal talent show and more, as performers outdo themselves on the various nights of Lac La Biche Pow Wow Days, July 29 - 31. 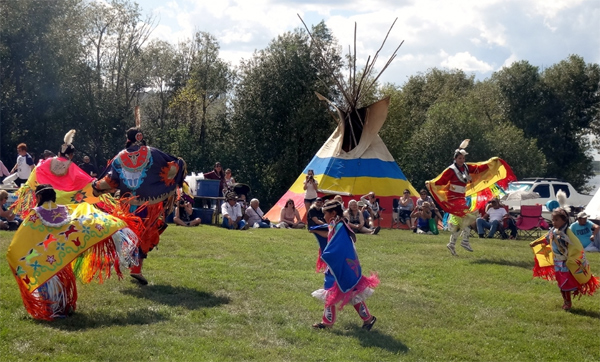 Lac La Biche Pow Wow Days is a celebration of all cultures in the area.

It’s all part of the excitement of living in such a unique part of the world, Arsenault says. “The diversity of cultures here is great. The flavour of the people lends itself to great talent.”

That’s evident during Pow Wow, when the amateur talent comes out to play with the pros in a live performance during the Home Made Jam event.

“Most of them have never had the chance before – and every year, there is amazing talent,” says Brian Deheer, part of The Torpedoes band, which played the Battle of the Bands at last year’s Pow Wow. This year, a Family Country Rock Dance featuring Savage Playground and Vanity Red happens Friday, July 30 at 7 p.m.

Meanwhile, Ken Flaherty, who is burning up the vocals at the Legion’s Friday night steak dinner, is scheduled to play with Real St. Jean Friday from 2 p.m. to 5 p.m. at the Lakeland Agricom centre, where the Lakeland Country Fair and Rodeo takes place. He’s known for his original music with three CDs to his name, and he’s working on the fourth) and deep voice that might just remind you of Johnny Cash with a folksy bent.

The music scene is just the start of the entertainment at the annual Pow Wow event.

Among the activities, there are also fish frys, a midway, art show and sale, a bazaar, family bingo and the parade. That’s just one event that brings back memories for Lac La Biche mayor, Omer Moghrabi.

“I started out sweeping the streets and sidewalks for the parade,” he says “Then I was ball boy for the ball tournaments, then I organized the ball tourney for many years. I love Pow Wow.”

The grounds have all the usual fun fare to keep the young ones amused – the midway with rides and cotton candy. The smaller venue lends a more down-home feel, meaning fewer crowds and a lot more time to ride the ferris wheel or the carrousel. 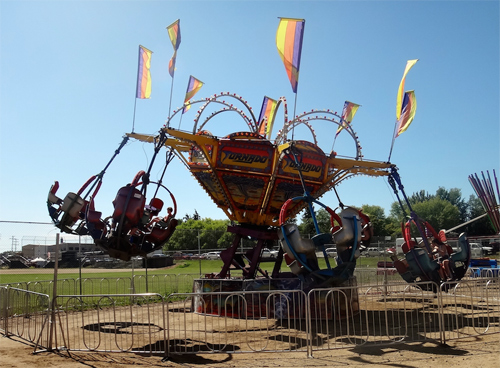 The midway during Pow Wow Days is always a hit with the kids.

The parade is a must. On Friday, July 30 at 11 a.m., young and old alike line the streets as candy and water are tossed around with abandon. The Children’s Festival is another popular event that runs daily from noon to 5 p.m.

As the name of the event suggest, there’s a strong presence of the indigenous people on the fairgrounds, where teepees are set up and traditional dances and hand games are performed.

Get ready to play ball, too. Or just sit back and watch when you’re ready to take a break from the midway. The diamond is located on the grounds and involves some fine baseball during AA tournament or slow-pitch tournament, where teams vie for money prizes all weekend.

Tired of the grounds? Be sure to head to Sir Winston Churchill Provincial Park (on the island just 13 kilometres northeast of the hamlet along the lake) where more fun activities are planned, including a cardboard boat race and triathlon of paddling, running and biking.

Lac La Biche is a base for water bombers, critical to the fighting of forest fires – and you’ll want to head down to the front of the legion at the water’s edge at noon on Friday for a demonstration of these amazing crafts as they pick up – and dump – the huge amount of water they can carry. 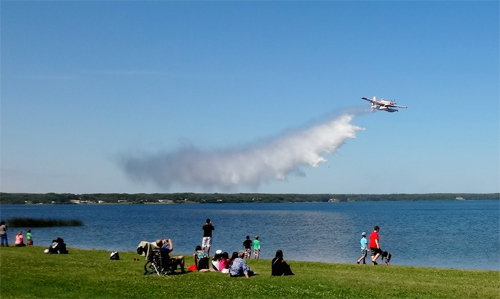 Watch the water bombers as part of the weekend festivities.

With all those lakes, it’s no wonder the Fish Derby is also a big part of the weekend, which takes place on Beaver Lake just a few kilometres south of the hamlet. The competition is fierce, with many categories (including grandparent and child) and for who hooks the biggest fish.

For a complete list of events, click here and read more on the Lakeland Country Fair here.