Ken Staples says that a really good ice race driver is someone who can feel the ice beneath him and stay in control of the vehicle even though it’s always loose.
Photo courtesy of Lac La Biche Tourism

LAC LA BICHE, AB - Most people would rather not drive on an icy road for fear of a white-knuckling experience trying to stay in control of the car.  But then again, most people aren’t ice racers.

The extreme sport attracts people who want a little adventure and a whole lot of fun. It’s similar to regular car racing in that participants attempt to complete a set number of laps in the fastest time possible - on a track of ice instead of asphalt.

Western Canada has an active ice-racing schedule and holds races on lakes throughout the season. But the race that everyone wants to win is the Winter Festival of Speed in Lac La Biche.

This premier event first took place in 1984. Event organizer Ken Staples has been involved every year since. But this year, Mother Nature has forced Staples to move the track off the lake and onto the Pow Wow Grounds.

But he adds, “There’s still lots to see and lots to keep the sport alive.”

Drivers can still race in the non-studded tire category and vie for the title of Western Canadian Ice Race Champion. Attendees can still take in the Snowmobile Power Rally and the Horse and Sleigh Poker Rally. And all the youngsters will still get a chance to participate in the On The Pond Tournament. 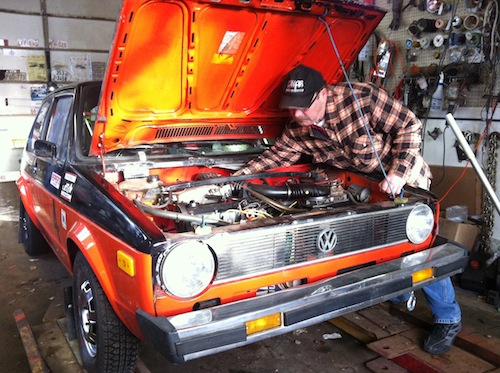 Colin Schultz customized his VW Rabbit to be light and super fast.
Photo by Laura England

If you make your way to Lac La Biche for this event, you may be lucky enough to see Colin Schultz behind the wheel of his super-fast VW Rabbit. Schultz is a lifelong fan of car racing on any surface, but has a special fondness for the frozen variety.

Schultz has customized his VW by making it as light as possible. But he points out that entrants can use a vehicle of any make, model or engine size. The only constant must be safety and that includes your car having a roll bar, cage and harness.

“Safety equipment is paramount,” says Schultz. “Ice racing is supposed to be a gentleman’s sport with no contact, but that is usually inevitable.” All racers must complete a two-day racing course where they receive their license to drive on ice.

“Ultimately, it’s a really great experience and you become a better driver,” says Schultz. “You’ve got to use your head and find traction where you can.”

Staples agrees. “A really good ice race driver is someone who can feel the ice beneath him and stay in control of the vehicle even though it’s always loose.”

Asked what type of person likes to race on ice, Schultz says, “I’ve known drivers that were mechanics, lawyers and even one University of Alberta dean. I’ve been involved in this sport long enough to see second-generation drivers behind the wheel.”

So despite the challenges organizers face for this year’s Winter Festival of Speed, it appears this event, and this sport are not going to disappear in a cloud of snow. And perhaps those that fear the ice can learn to love it.

For details on the weekend events and race schedule, go back to the festival overview page