From humble beginnings of stand-alone folk shows in Salmon Arm community halls, the ROOTS&BLUES Festival has grown into a major Canadian outdoor event that has gained a loyal and music-loving audience from all over Western Canada and the Pacific North West.

Salmon Arm is the centre of the action in B.C.'s Interior, bringing thousands of people to the quiet little town on the shores of Shushwap Lake. From Aug. 13 - 14, the annual ROOTS&BLUES Festival offers a deep pool of musical talent in many genres. With a wide array of acts, including Colin James, Blue Moon Marquee, The Small Glories and Celeigh Cardinal taking to the stage, it’s going to be a great weekend.

Colin James blends the traditions of roots music and step-dancing with his own artistic voice and vision in a high-energy show that puts his award-winning songwriting talents out front.

Blue Moon Marquee is a Gypsy Blues band born of the wild rose foothills of Alberta. They currently make their home in an island shack on the coast of the Salish Sea ,British Columbia.

The Small Glories is a Canadian folk duo from Winnipeg composed of Cara Luft and J.D. Edwards, both of whom perform on guitar and vocals.

Luft and Edwards first played together in 2012, when both played a 25th-anniversary show for the West End Cultural Centre in Winnipeg, and in 2014, Edwards played with Luft on her solo tour. Soon after this, they began recording as a duo, and in 2016, their debut as the Small Glories, entitled Wondrous Traveler, was released. For their second album, they worked with producer Neil Osborne, who was a member of 54-40. They signed to Red House Records to release the album, entitled Assiniboine & the Red, in 2019.

The Festival will be virtual this year! Make sure to use this link to find yourself there when it happens! https://www.rootsandblues.ca/ 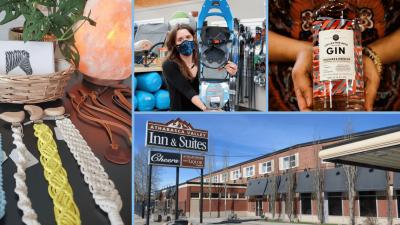