Carol Pilon was born to fly high; it’s what gets her out of bed every day 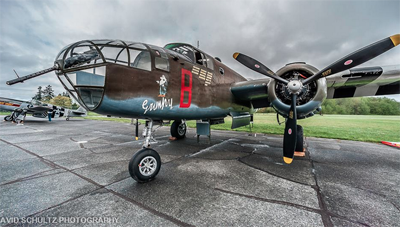 There will be plenty of thrills at the Edmonton Air Show.
Photo by David Schultz

EDMONTON - “When it goes together right — you are in the moment and it feels great. It’s an awesome ride.”

What would possibly make a young lady decide she needs to step out of a plane and stand on the wing while the plane dips and dives above a crowded airport?

“It was a three-second wing walker clip in a TV commercial,” says Carol Pilon from her home in Masham, Que., where she works at the family grocery store when not walking on the wings of her Boeing Starman biplane.

“I thought it was awesome and when I finally saw a live show, I knew it would be something that I would do for the rest of my life. It took seven years of pleading and begging other wing walkers before I found someone willing to let me up. The first time I climbed out and up and buckled in the rack it was— hell yeah, this is what it’s like to be home. It was everything I wanted it to be.” 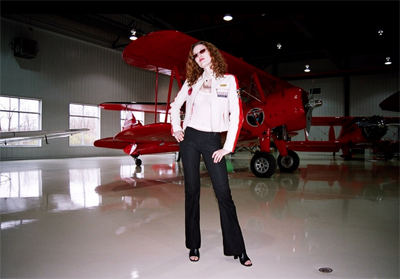 Canada's only wing walker, Carol Pilon, will be at the festival.
Photo by Jim Rogers

Making the announcement to the family about the career move was met with trepidation. “When I told my dad that I was going to be a wing walker the look on his face was priceless. Like the face saved for when a kid comes home with a bad tattoo. But after he watched me try for seven years he became my biggest supporter.”

Canada's first and only wing walker

Jump forward 15 years and Pilon has racked up a list of amazing highlights. She is the first Canadian and only Canadian wing walker, has performed in front of millions of people and has walked on many planes, including the most powerful aircraft, a Jetwaco with 3000 available horsepower.

Pilon says some of her career highlights happen in the blink of an eye. “I’ve had some great mid-air encounters with other pilots. One time we were flying over a jet team of L39s and just as we flew over the cockpit of one of the planes I saluted the pilot and he saluted me back. It was a split second but the coolest thing to experience.” 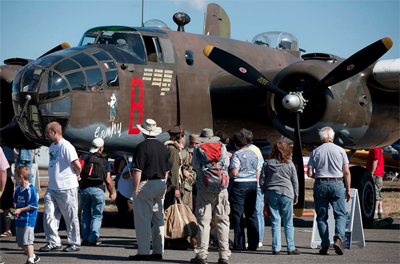 Spectators at the air show will get to see some heav-duty aircraft.
Photo by Jeremy Dwyer-Lindgren

Pilon has performed at airshows all over North America and many in Alberta, but this is the first time she is performing in Edmonton. This will be the first airshow in the Edmonton region since 2002.

The Edmonton airshow will run from 10 a.m. to 6 p.m. on Saturday and Sunday with the featured air performances running from 1 p.m. to 3 p.m. Pilon’s performance takes about eight to 20 minutes. Expect to see her do tricks as she hangs on while the plane dips, dives, rolls and floats upside down. Tweet This!

Out in the wind, no protection from bugs or birds that feel like cement blocks if they strike her and no parachute. A tether attached to the plane is her protection. Has she used it? No. And doesn’t plan to test it.

Other performances include pilots from Air Canada who love to do aerobatics instead of just taking off and landing. Some of these pilots that have flown since they were 12, including an Canadian Air Force pilot who used to lead the famous Snowbirds. Some of the pilots are stars from the Discovery Channel’s Airshow. On the ground —or what should be on the ground is FMX, the freestyle motocross exhibition by Keith Sayers. He takes to the air, flipping his motorcycle before landing the jumps.

Bring your own lawn chair or blanket to sit on. Also pack sunglasses and ear plugs. You are welcome to bring your own picnic basket  — (but they had me at food truck village!)

Most importantly, don’t forget your binoculars so you can watch Pilon as she flies by on the brilliant red biplane. She’ll be smiling. “Wing walking is the best thing for me. I truly love doing it. It makes my heart sing. It gets me leaping out of bed every day.”

For more information, check out the official Edmonton AirShow website.