Rumble in the mud fields

Rumble in the mud fields

Get your engines started the TailCreek MudFest is coming soon.

ALIX, AB - Eating a roasted pig’s eye after watching the giant tires of a competitor’s truck roll over the side of your vehicle mid-race has to be one of the more stomach-churning insults ever added to near-injury in any sport. But that is the sport of offroad racing. And that was just a bet between friends one summer race weekend down at Tail Creek Raceway in Alix, AB.

It’s the kind of thing that happens in the close-knit Alberta offroad racing community, where weekend warriors and pros alike camp, race and wrench together in a gypsy caravan of engine grease, dust and rock ‘n’ roll. Picture a friendlier, greener Mad Max. 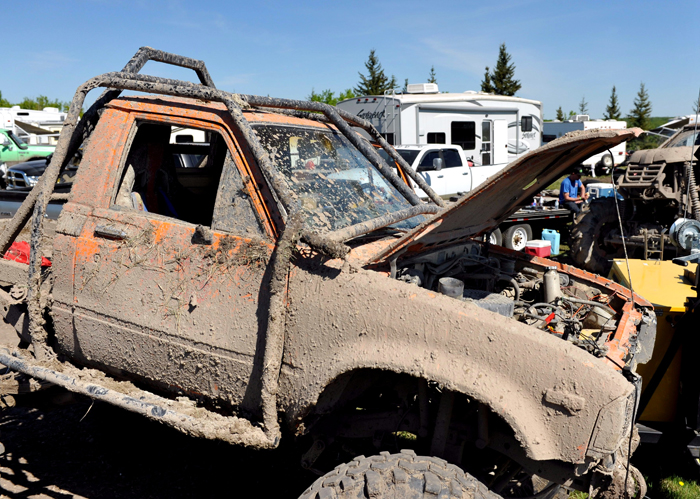 Get ready for a mud-filled time at Tail Creek.

It makes for one hell of a festival setting for the Tail Creek Mudfest, which runs over the Canada Day weekend, June 30 - July 2, and combines vehicular Mayhem! Mayhem! Mayhem! and musical acts including headliners Big Sugar, Lee Aaron, David Lee Murphy and Emerson Drive.

Offroad racing breaks down into different classes and styles - dirt, obstacle and endurance are among the different disciplines. Depending on the style, the rigs are customized for some combination of speed, agility, power and simple endurance.

The price tag for these machines can run anywhere from a few thousand dollars to the hundreds of thousands at the elite level. There’s big money in it, but it’s not a precursor to participation 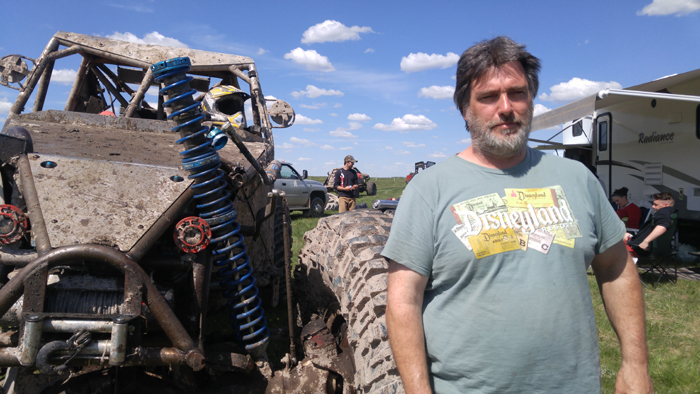 The cars used in mud bogging are suprisingly pricey when at the elite level.

“Guys do scrounge, it’s a big community - a lot of guys trade back and forth, wheel and deal,” says Dan Osterhaus, a regular on the Alberta offroad scene. “Anybody can come out and race.”

Big machines, loud engines and high-speed action make it entertaining for spectators, but ask racers what the sport is really all about, and the answer is unanimous: community.

“We work as teams, it’s not just one guy,” says Greg Torre, who says he’s been racing seriously now for about three years. “We pretty much all know each other. Most of the guys like to beak on Facebook, and then we have bets, usually involving some physical shaming.”

“You’re there racing each other that day, but you’re also there helping wrench on your buddy’s vehicle that night so you have the best competition to race against again the next day,” says Ryan Stambaugh, who runs the Punisher race and has competed in the King of the Hammer championships down in the U.S. which commands primetime coverage and the biggest purses in the offroad world.

“These guys,” he continues, gesturing to Torre, Osterhaus and friends, “are the prime example. They’re all buddies, but they race harder against each other than anyone else because you don’t want to come into the pit second.” 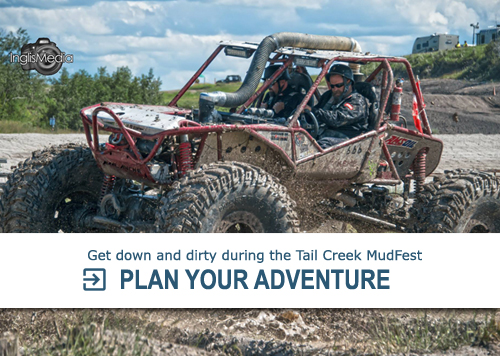 Torre has a brand new rig, covered in mud from two runs around the track. Next to it sits Osterhaus’s new buggy, shiny orange and looking brand new. “That one’s a pavement princess,” cracks Torre.

In a sport where giant boulders, muddy bogs, steep hills and big rollers can send vehicles hurtling and crashing around and into all manner of obstacles, the biggest praise is reserved for the pit crew.

“I’m known for rolling my race car at inopportune times,” says Stambaugh. “I brought the pit crew in a big cake and it said, ‘Sorry I rolled the race car, now fix it for this cake’,” he recalls, after he rolled early in his first time out in his new car at a big race.

“Now I have a cake sponsor; the Rocky Co-op pays for half of my ‘Sorry I rolled the race car’ cakes.” 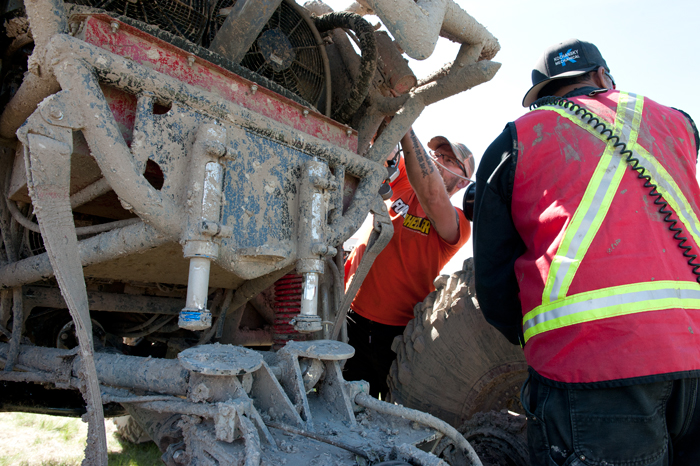 Working on the machines used for the mud fest.

Over the Canada Day weekend, racers will be competing in both the Ultra 4 and Outlaw 4 series, with up to eight vehicles on the track at one time navigating that Mad Max-inspired circuit.

Mud, trash talk, classic rock and eyeball bets … billed as Canada’s biggest off-road mud and music fest, the Tail Creek Mudfest is gearing up to be a piston-busting good time. And who knows, there may even be some cake.

Grab your tickets to the TailCreek MudFest here

Head on over to the official Facebook page of the TailCreek MudFest to learn more about the event.

Read our festival overview of the TailCreek MudFest

Are you ready for a heart-pumping weekend? Share this page with your crew and get them excited for mudding, too.