Roy and John on site in Galt Garens where this year’s Oktoberfest will be held in Lethbridge.

LETHBRIDGE - Roy Pogorzelski travelled all the way to Bavaria, Germany to get a taste of the most authentic Oktoberfest he could - and brought it back to Lethbridge.

For the past couple of years, the Lethbridge Oktoberfest has been a labour of love for he and his brother, John.

Once again their event planning company, The Pogo Bros, are organizing the two-day fest, tapping into the traditions of an authentic German Oktoberfest. And, they’re ready for the fast-paced action of the weekend.

“Everything goes by so fast. There is so much energy,” says Roy, recalling feeling happy but exhausted after last year’s successful event.

Now in its third year, Oktoberfest festivities will held beneath white tents at Gault Gardens in downtown Lethbridge from Sept. 30 - Oct. 1.

Local businesses are also busy prepping for the party.

Because it wouldn’t be Oktoberfest without schnitzel, I stopped into the Telegraph Tap House to sample some of what they’ll be serving during the festival. Prepared on a garlic butter toasted bun and topped with sauerkraut and bacon, one taste told me this is going to be a crowd favourite.

Oktoberfest-goers are in for a treat with dishes like this schnitzel from Telegraph Tap House.

“We are going to have between five and seven food vendors and they are all going to have something different for sale that will fit with the Oktoberfest theme,” says John.

“It is important to us to create as close of an authentic Oktoberfest experiences we can get,” says Roy, who did his homework on the ground in Bavaria, Germany so he could make the Lethbridge Oktoberfest as authentic as possible. He uses that experience in planning the fest, paying close attention to not only the food, but also the music and drinks that are served.  It's this attention to detail that sets the Lethbridge Oktoberfest apart from others, he believes.

And what’s an Oktoberfest without a rousing polka dance? Local bands such as Classic Legends and The Notables will entertain with live music. Medicine Hat’s Oom Pah Pah band, Alpen Schatz will also there in their full Bavarian attire of lederhosen and feathered hats for an authentic musical experience. 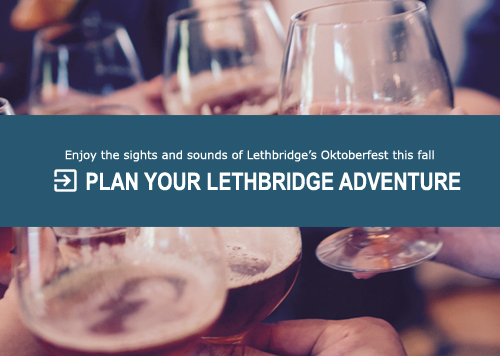 Beer enthusiasts can expect to sample German beer such as Hacker-Pschorr during the event, and one local brewery has a special treat. Theoretically Brewing, has been working on a limited edition beer that will be sold exclusively during Oktoberfest. It’s called the Zigge Zagge, and the brewery expects to have approximately 700 bottles available during the festival.

“For a beer to be brewed according to the official German Purity Law, or Reinheitsgebot, it can only have four ingredients: water, hops, barley and yeast,”  says Kelti Boissonneault, Theoretically Brewing’s manager, noting that this combination gave the beer a nice banana and clove flavour.

“These are the only  beers that are allowed at the original Oktoberfest in Germany. This beer has those four ingredients only, and we are using a yeast from Munich to add more authenticity.”

There was excitement all around as we tried the first sample of Theoretically Brewing’s limited edition brew that will be exclusively sold during Oktoberfest.

Zigge Zagge has a light taste. It’s refreshing and, personally, I think it tastes ‘like bananas at Christmas. Since I consider myself an amateur beer enthusiast at best, I asked Kelti how she would describe the taste. “I would say it is young with banana esters and cloves, and citrus notes at the End,” she says.

Kelti also noted that a slice of orange in the beer would be amazing. The location of the festival is in central downtown Lethbridge and there are a lot of options for additional things to do while you are visiting the city.

Other things to do in Lethbridge

During the day, a trip to the coulees at Indian Battle Park is minutes away from downtown and offers hiking trails with beautiful scenery.

Beautiful and mild to moderately challenging trails in Indian Battle Park lead you through the coulees and up to this scenic lookout.

Located across the street from Galt Gardens, 6th Avenue is alive with activity and includes a comic book/games store, clothing stores a thrift shop and both the Telegraph Tap House and Plum, two restaurants that will be open for after-hours parties on the Saturday night of Oktoberfest.

“We are looking forward to Oktoberfest and the after party and we’re already thinking about creating some fun German-inspired appetizers for that night,” says Travis Dunnet, general manager and sommelier at Plum.

Need accommodations? You can find some great deals by purchasing your stay through the Visit Lethbridge website. Enter OKT on the website and book through their partners to get a group rate discount that will be determined by hotel. Everyone who uses the code will be entered to win a two-night stay in the hotel and a $250 gift card to Plum.

Make sure to add the Lethbridge Oktoberfest to your calendar. Join the Facebook Event below

Are you ready to indulge in this German tradition? Share this page with your friends and start planning your trip to the Lethbridge Oktoberfest!