VERMILION, AB - Shawn Bell, director of community services for the Town of Vermilion, has a dilemma on his hands. Not just himself, but also the people organizing this year’s Canada Day celebrations in the town about an hour east of Edmonton on the Yellowhead Highway.

One of the annual highlights of the day, which is actually held on a Saturday closest to or on Canada Day, is the movie in the park. After a day filled with a wide variety of activities, hundreds of adults and children will pull out their lawn chairs or their blankets, get comfortable on the grass in Vermilion Provincial Park and wait for the movie to start on the large outdoor screen.

Movie in the Park

The dilemma at the moment for the organizers is what movie to show.

“It’s up in the air between showing a new movie or a classic,” Bell said in early June. “We need to decide shortly.”

Truth is, no matter which movie they decide on, either one will be a winner for those watching.

“It’s such a neat atmosphere,” Bell said of the situation. “It’s on the soccer field, a wide-open space…families bring their lawn chairs and dress for the weather, sit on the grass and watch a movie.”

“During the day, businesses can put on promotions,” said Bell. “They have different things to promote, both their business and celebrating Canada, and we get good participation from businesses both downtown and at the mall.”

The day begins with a pancake breakfast hosted by Communities in Bloom followed by a host of downtown activities that includes children’s games and free fruit smoothies from the Vermilion Wellness Coalition to the first 200 people.

“We also have an open stage downtown,” said Bell. “It’s semi-organized event where people …. if they want to play for a while, they can show their musical talents. That’s been very popular.

Barbecue and a Band

A local car show is also scheduled along with a home-business trade show in the mall.

“In the evening we have a few things going,” said Bell. “Most of our evening events are hosted at the Vermilion Provincial Park, which is a real nice setting for having people and families come out and relax and enjoy the outdoors.”

A steak fry is scheduled for the Legion at 5 p.m. and there will be a barbecue supper in the park from six to eight. 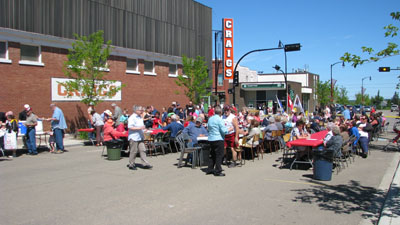 “At eight we’ll have a local artist, Amber Bauer, performing on stage. She’ll perform for a couple of hours with a three-piece band.”

During the barbecue there’ll be some old-fashioned activities, hosted by the mental health capacity building project, such as a three-legged race, maybe wheel barrel, sack race and geocaching, plus Frisbee golf.

“It’s family-oriented events, as is the music and the barbecue. So that stuff’s going to happen from six to eight.”

Then comes the movie and shortly after midnight, so it’s actually on Canada Day, there will be fireworks.

“We typically say we get about 700 for the (barbecue supper), but all together I would say 1,500 to 2,000 people (for the day), which is a great turnout,” said Bell. “We’re a town of 4,500 people. Of course it’s not all Vermilion residents. There’s county residents and people from other places come too.”