Who let the bulls loose?

Who let the bulls loose?

Outside Pamplona, only the Strathmore Stampede offers amateurs the rush of running with bulls 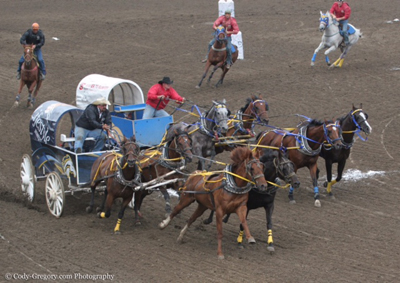 While many have visited the Calgary Stampede rodeo, the town of Strathmore
is home to one of the biggest CPRA-sanctioned rodeos around.
Photo provided by the Strathmore Stampede

Strathmore, AB. — Ever since I was a kid, I’ve dreamed of running with the bulls. I don’t know if it was Hollywood’s influence or the simple allure of danger and adventure — the rumbling under your feet, the adrenaline rush as the rippling mass of beasts surge toward you — but the dream has never died.

Some irony then, that I grew up and discovered that outside Pamplona, Spain, the only Running with the Bulls event now happens in my old childhood hometown of Strathmore, AB. The action unfolds over two consecutive August long weekend nights, with 80 competitors each evening, 30 or so bulls and three rounds of mayhem lasting between five and 10 minutes. 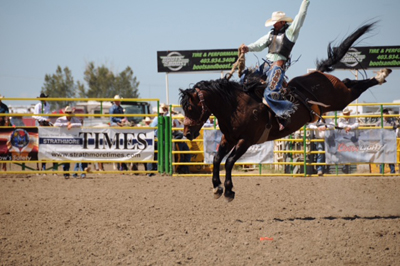 But the Running of the Bulls certainly marks it as the coolest. Tweet This!

Unlike the pro events, Running with the Bulls is for amateurs only. For aspiring runners, registration begins at 11 a.m. the morning of.

It’s best to register early, but there are plenty of distractions to keep your mind off what’s to come, with the rodeo, professional chuckwagon races, live music — headlined by the band Chilliwack Friday night — and a host of family activities. In addition to traditional Lions Club fare, this year there will be a caravan of food trucks from Calgary to provide pre- and post-race nourishment. And for non-runners, there’s the spectacle of watching a bunch of crazy daredevils getting into a corral filled with testy bulls.

For the last two years, the event — and the $1,000 purse — has been won by Eric Hanson, a lanky 23- year-old Strathmore native who parades around the corral in a giraffe suit. But for an ill-fated move to the city when I was 12, that might have been me. Determined not to let the dream die, I called Hanson to learn the secret of his success — and perhaps a few tips to avoid getting gored.

Want to see all the events during the Stampede weekend? Get the all performace package for $140 and save.

Hailing from a five-generation farm family in Wheatland County, Hanson’s been around livestock most of his life. “I’ve had a few run-ins with the bulls at the farm here, too,” he quips.

In fact, the scariest encounter he’s had with livestock wasn’t at the Stampede, but during routine branding at home when one bull got ornery.

“There were about 10 people trying to chase it. Lucky enough, it went for me,” he says. “I tried jumping the fence but it hit the fence so hard its horn went through the fence and into the back of my leg.”

In his choice of words, “lucky for me,” Hanson reveals the second ingredient for success, next to livestock experience — good fortune and a little dash of crazy. 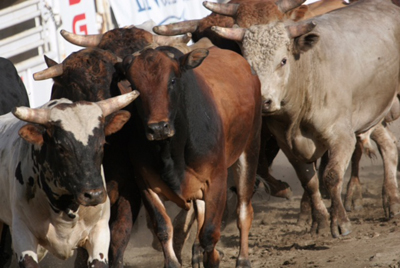 Competitors are required to have reasonable fitness, but beyond that, how do you train to avoid much larger, faster moving animals in a confined space?

“Agility and sprinting are the two big ones,” Hanson says. “You’ve gotta have a good pair of legs to run and keep up with them.” The ability to vault a fence might come in handy too, though it’s reassuring to note that there are wranglers on horseback in the ring to help rescue the fallen.

The running of the bulls is open to the public — aka those crazy types.
Photo provided by the Strathmore Stampede

True to country life in Alberta, camaraderie is one of the keys to survival. “Even if someone just trips, everyone is jumping in there to help as fast as they can,” says Hanson.

For first-timers, he recommends, “Just enter and start making friends, and asking questions of the people who’ve run it before.”

I tell Hanson I’m going to search him out and emulate his winning ways. He laughs, and welcomes me to join him: “I’ll be the guy in the giraffe suit.”

Check out the official Strathmore Stampede website for more info.

Read our FestivalSeekers overview for the schedule of events.